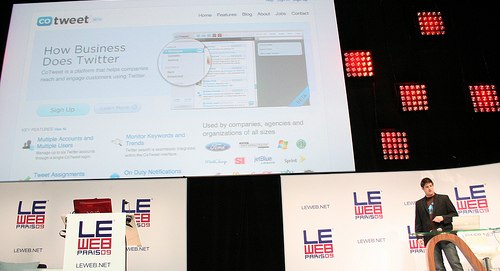 Last week, I was kindly invited to attend LeWeb 09 as official blogger. LeWeb is a yearly, two-day conference in Paris, which takes a deep look at the web now and in the future. It’s a frenzied opportunity to meet new people, see old faces and hear great talks.

While watching the world go by at Ebbsfleet Eurostar station, (the best kept secret of European travel) before heading to Paris, it hit me that we nearly halfway through December. I started thinking back on 2009, the successes and failures I’ve experienced or witnessed others experience. It’s been an interesting year, with a few victories, but a few scraped knees also.

Then yesterday morning, in one of the first talks of LeWeb, Jack Dorsey, Twitter co-founder said:

“The hardest thing about an idea is to get it started”

I’ll tell you a secret: I used to really hate being rubbish at something, to the point where, when I was a teenager, I wouldn’t even rehearse for my vocal music classes in front of people for fear they’d hear me do something wrong. Yet I’d happily sing in concert in front of a huge crowd at the end of the year! And I didn’t speak English til I was in my teens, not because I couldn’t, but because I was embarrassed by my accent.

It doesn’t take much to realise that nearly everyone feels that way to a varying degree; the fear of failure can paralyse us and stop us from doing things we REALLY want to do.

LeWeb is filled with people who’ve taken that jump, who’ve conquered their fears, their peers’ fears, or at least sidelined them long enough to give their ideas a go. Whether it’s launching a startup instead of staying in a cushy-but-boring megacorp job, launching a new wacky iPhone idea or creating and manufacturing a small-run Psion-revival pocket computer.

These people and startups risk money, energy and years of their life for something they’re passionate about or think might change the world (or at least make a dent of difference). They use events and conferences as an opportunity to gain visibility, get feedback on what they’ve created and meet existing and potential users. Needless to say, they also leave with a few bruises from those who don’t “get” their idea and either say it bluntly or tweet it publicly.

Of course, only one out of five* will break even, and only a handful will become rockstars. But some of those who failed will get back up, try something else and one day, succeed.

So as we hurtle towards 2010, why not let ourselves get inspired by brave startups and self-employed ppl who’ve flown the nest of safety and try doing something awesome?

Hopefully, some attendees (or some of the thousands of online viewers of the LeWeb video stream) will be inspired to do something for the greater good in the process. Whether it’s organising a BarCamp event, running a charity-focused event in support of 1GOAL (as presented by Queen Rania) or providing charitable organisations with free coaching, share your wisdom with others.

As Gary Vaynerchuk said, in his usual blunt way, “Everybody’s got a shot, I don’t care if you are in Sillicon Valley or in France” (See his talk here) As Gary has done, from being co-owner of a New Jersey wine shop to becoming a web celeb, he’s shown us that with enough passion and drive, we can achieve just about anything.

Talking about driving… Heading down to Ebbsfleet station, I couldn’t help but be amused that it was a fairly leisurely drive, albeit one involving some of the busiest motorways in the country. Two years ago, the thought of having to drive down the M25 gave me cold sweats. I could have gone on to avoid driving like I had done until I was 25, but I reluctantly went through the scary challenge of driving lessons (it was scary in my eyes, alright!?) A few years on, I couldn’t be happier that I’m on the other side of it all. In hindsight, the hardest thing was to get started.

We all need to occasionally tackle a few fears or go above what we believe we can achieve right here and right now. It takes a while, trudging through how frustratingly bad we are at something at first, but then… oh THEN we feel like we’ve really achieved something great!

To read more from other LeWeb official bloggers, visit the aggregated posts page – with most of them doing a far better job summarising the event than I have done!

[* Stat entirely pulled out of thin air to be representative, don’t quote me on that one and see the experts for real stats]
[Photo credit: LeWeb 09 by Blogowski on Flickr, Creative Commons license]

Gary Vaynerchuk, for those who don’t yet know him, is the guy behind, in front and all around Wine Library TV. He’s a raving looney, a totally loveable geek but most of all, a rough diamond of community relations amongst the world of overly polished marketing bullshit. He says things as they are and has marked me enough during SXSWi this year that I’ve got a couple of things he’s said up on my board of inspirational quotes in the office. (Thank you Gary, genuinely!)

He also agreed with me that making your own wine is a bad idea, mmmkay dad?

PS – I want my own WLTV sweatband bracelet thinger!

For this panel, I’ll admit my notes were a bit patchy and I relied on a few other ppl’s notes to improve them. I was too mesmerised by Kathy’s talk to worry so much about notes. But read on anyways…

I’ve also borrowed a few of Kathy’s images to illustrate for those who weren’t so lucky as to attend. They’re completely her copyright, ownership and what not. (They rock!)
END_OF_DOCUMENT_TOKEN_TO_BE_REPLACED