A few months ago, Twitter published a State of Twitter Spam blog post. It claimed to have reduced spam from fake accounts to little more than 1%, lowering the number of offers for prescription drugs, dodgy online scams and invitations from busty babes. We complain about Twitter more than we praise them, but this deserves a “well done!” 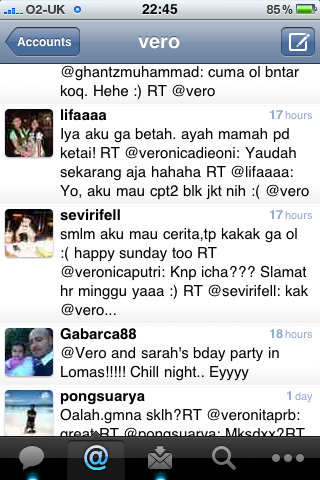 What’s on the increase and quite possibly trickier to control is the noise created by users who don’t understand how Twitter works – usernames in particular.

There seem to be a few trends:

Users in Malaysia and Indonesia seem to use retweets as a way to “thread” conversation. As a result, the oldest words get truncated. As Veronica seems to be a common name, I’ll often have more misappropriated foreign tweets than real @replies in my stream.

The next flavour of Twitter spam is due to users who don’t understand that @Vero or @Jake or @Bob are really someone’s usernames and use them willy nilly.

I often see “@Vero’s house for a party” and hope that some stranger isn’t on the way to my place with a couple of crates of beer for an impromptu gathering.

I’ll be interested to see how Twitter tackles this kind of issue. Having steamed past the 100 millionth user some time ago, the noise level is quickly becoming deafening.

Unlike classic spam where a user publishes the same thing hundreds of times, this can’t be fixed as easily as it’s a user education issue.