Last week, I ran a competition, inviting readers to leave comments and share their best home office or lifehack tip in order to win an LG 23″ monitor. As it turns out, my readers are just as awesomely geeky as I am.

Once the competition ended, I used the Random Number Generator to choose a comment out of the 38 valid comments, with a view that if my own comment came up, I’d draw a number again.

And the winner is… *drum roll* Zoe Rose from Cambridge. LG will be sending Zoe a monitor very soon, and I’m sure Zoe will send us pics of her new home office setup.

As for my views of the LG screen, well…  I think the reality speaks for itself: I’m still using it instead of my 24″ Samsung screen. The main benefit of that switch is the huge difference the brightness sensor has made; it’s been a summer of days that varied wildly from very bright outside to cloudy and dark, yet at no point did I get that searingly bright light feeling. Also, being such a wide screen (1920 x 1080), it fits plenty of my crap on a single screen.

I won’t harp on because I always feel awkward when the schwag is given to me, but all in all, the LG monitor comes pretty highly recommended for its reasonable price (around £150). We spend such long hours in front of a screen, it’s worth getting a good one so as not to go blind by the age of 40!

Since the comments from the readers were so good, I’ll most likely make an entire post summarising them in the near future. In the meantime, go read them for yourself here and, while the competition is obviously over, feel free to add your own tips and tricks.

It’s never been a secret that I’m a bit of a GTD nerd, and since working from home, have tried to tweak my home office to be as welcoming as possible. 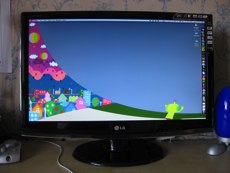 So recently, when LG offered to send me a 23″ W53 monitor to review AND one to give away to readers, I couldn’t resist saying yes. I’ll be reviewing it soon, but first impressions are excellent and it has taken prime spot on my desk (replacing a Samsung 24″ I’d only bought in January).

How to win the monitor

I’m keeping the competition nice and simple, so that it only takes you a minute to take part: Tell me about your best office or life hack. Whether at home or when sharing an office with others, we each have our own way of making our working life slightly more comfortable/enjoyable, so tell me what your tricks are. I’ve published a few tips of my own before, and would love to hear yours.

Leave a comment with your own tip by August 4th, and you’ll be in with a chance of getting a brand new LG W2353V monitor (retailing at about £149) delivered to your door in a few weeks. This competition is now closed, but feel free to leave more interesting tips and tricks. Maybe I’ll give you a cookie.